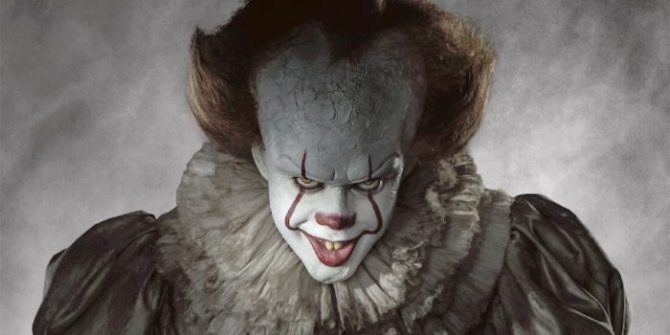 Swanner: Based on a Stephen King novel, It follows a group of teenagers who are trying to find out why the kids in their town are disappearing. After they have all had the vision of a menacing clown that tries to lure them to the sewers where it lives, they look further at the history of their town to realize that this happens every 27 years, and has been happening for centuries. First made as a mini series in 1990, director Andy Muschietti does not hold back on bringing the scare to this big screen adaptation.

Judd: It stars Jaeden Lieberher (St Vincent, Midnight Special), Bill Denbrough, Sophia Lillis, Finn Wolfhard (Stranger Things), Chosen Jacobs, Jack Dylan Grazer, and Eddie Kasbrak as our Losers and Bill Skarsgard as the iconic Pennywise. The movie plays like an R-rated Stand By Me. A much longer, louder, less engaging Stand By Me.

Swanner: It’s not surprising since Stand By Me was another King story. If you were better versed in King you would have noticed a lot of different pieces from other novels easter egged in the film. This is about summers really. When you didn’t have the distractions kids have today. Where a whole summer was looking for monsters. The difference for these kids is the monsters are real. The character development is wonderful because most people will finds themselves as one of the characters. So, when something happens to your character, it’s double scary. By the way, Stand By Me was rated R.

Judd: Well thank you for correcting me and publicly discrediting me, which renders any further point I try to make moot. The movie was too long, too loud, and Pennywise wasn’t scary.

Swanner: This has always been one of my favorite King stories. I like that the kids realize it takes all of them concurring their fear to fight a monster. A lesson everyone should learn today. I think the writers and the director knew what they were doing and how to handle Kind’s work. Pennywise was terrifying to everyone but you, Brian. As good as the kids are in the film, Bill Skarsgard is the real hero. He took an iconic character and made him different but kept the clown true to the book. This is definitely one of the best Stephen King adaptations and will hopefully spawn more.