Swanner: When we last saw John Wick, he and his dog were on the run from the international assassin’s guild, the High Table, who has lost favor with Wick and has placed a bounty on his head of $14 million dollars. This has every would be assassin looking to kill Wick. Chad Stahelski returns to direct for this third installment, bringing his years of stunt work into one big beautiful big screen dance. When I say dance, I mean there is less choreography in West Side Story than in The John Wick’s films. It’s hypnotic, and a work of art.

I always remind people that in John Wick’s world, everyone is an assassin, from the homeless man on the streets, to the woman selling tickets at the box office. So, when they hear that $14 million dollars is offered for his head…everyone wants that payout. In this third installment, Wick looks for help from his allies. He goes to the director (Angelica Huston), Sophia (Halle Berry), The Bowery King (Laurence Fishburne), and even the The Manager (Ian McShane) for help, but all know by helping Wick they could be facing the same fate. The cast is as good as it sounds…yes, even Halle Berry. Berry’s character has two shepherds that completely steal every scene they’re in, and now I want a shepherd.

During the screening, the audience was laughing every time he has a really great kill. It’s not because we are all desensitized with the violence, no; it’s because John Wick is a hero. He loved his wife and his dog. Once both were taken from him, someone had to pay. Our Hero likes his revenge, and so do we. Say what you want about vigilante films. Sure, we know there are laws that we have to follow, but in film, we see the good in immediate payback. You mess with me, you mess with my dog…

Swanner: Game Night is an event that couples without children get to enjoy. It’s where they gather their friends together to have alcohol and snacks in the comfort of someone’s living room. In this case Max (Jason Bateman) and his wife, Annie (Rachel McAdams), are very competitive game players. Enter Max’s successful brother Brooks (Kyle Chandler), who is back in town and has offered to host a mystery game night where someone gets taken and the rest of the attendees must solve the mystery. The problem here is Brooks isn’t the wall street guy he claims, and when the kidnappers arrive they aren’t the actors who were hired for the game, they are the real thing. Now Max and his friends actually have to solve a real kidnapping before something really bad happens.
Directors John Francis Daley and Jonathan Goldstein, along with screenwriter Mark Perez create this fun mix of twists and turns to keep any party guest entertained. They did a wonderful job of creating a terrifying situation with all of the party-goers oblivious to what’s really going on. As they slowly realize that what’s happening is real, it just adds to more laughs. The rest of the talented cast includes Sharon Horgan, Billy Magnussen, Lamorne Morris, Kylie Bunbury and Jesse Plemons.
I’m really hoping this is a big hit for Bateman. He’s always been a favorite with his brilliant dry wit and his amazing comic timing. He should really be a much bigger star. The film has everything going for it: a very funny script with capable directors working with a cast of funny actors. The film is rated R because the situations, as funny as they are, get intense and the language gets real. Not a film for the little kids because they shouldn’t see how much fun their parents once had before they ruined their parents lives.
Swanner: Three and 1/2 stars

Swanner:  “Black Panther” follows T’Challa who, after the events of “Captain America: Civil War,” returns home to the isolated, technologically advanced African nation of Wakanda to take his place as King. However, when an old enemy reappears on the radar, T’Challa’s mettle as King and Black Panther is tested when he is drawn into a conflict that puts the entire fate of Wakanda and the world at risk.
I went with the studio’s studio summary because the story is quite complicated, even though it very easy to follow visually. Chadwick Boseman stars as T’Challa, with Michael B Jordan as Erik Killmonger, the man who challenges T’Challa for the throne. Director Ryan Coogler (Creed), brings a fresh look at the superhero genre with co-writer Joe Robert Cole, using the source material to move this Shakespearean drama in new exciting ways.
As good as Boseman and Jordan are in the film, I found myself watching the women in the film. Like a good pride, the male watches over while the females protect. Lupita Nyong’o, Danai Gurira, and Letitia Wright play the women warriors that kick ass while the two leads growl. The production value is so amazing, and the whole look of the film is breathtaking. I know this is really more of an origin story that introduces us to these great characters, but promises more to come. I love how many critics thought Marvel didn’t have enough superheros that could command the big screen. Wrong again, because this king rules.
Swanner: 3 1/2 stars

Swanner: Early Man follows Dug, a cave man, who’s tribe has stayed in the stone age while the rest of the world had entered the bronze age. As the evil lord Nooth wants to take Dug’s land, our stoneaged friends are challenged to a soccer match where the winner takes all. From the folks that made Chicken Run and the Oscar winning, The Curse of the Were-Rabbit: where you can always expect a fun story with a funny script, and this does not disappoint.
Director Nick Park and writers Mark Burton and James Higginson do stop action better than anyone has since the Rankin Bass days of the 60’s and 70’s. Stop action is usually looked as a lost art form, but the talented animators here take the silliness of the look and movement and apply it beautifully to this caveman story.  Wes Anderson actually made a good movie when he made The Fantastic Mr. Fox, a stop action film.
The voice cast is filled with well known actors including Tom Hiddleston, Eddie Redmayne, Maisie Williams, Timothy Spall, Richard Ayoade, Mark Williams, Miriam Margolyes, and even the director, Nick Park. The films from this studio are always welcome with their different view on life and their nonsensical stories. I must say that the story is a bit light from what we’re used to getting, but it’s 90 minute running time couldn’t handle much more, and most won’t even find it missing.
Swanner: 3 stars 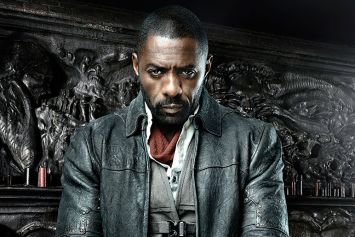 Swanner: This is a story of good vs evil. The last Gunslinger, Roland Deschain (Idris Elba), has been locked in an eternal battle with Walter O’Dim, also known as the Man in Black (Matthew McConaughey), determined to prevent him from toppling the Dark Tower, which holds all worlds together. Based on a series of novels from Stephen King, The Dark Tower started out as short stories that would later became the novel The Gunslinger. A total of eight books were published in this series.
This story follows Jake Chambers (Tom Taylor), a young boy with the shine, who is being hunted by the Man in Black and his henchmen. The Man in Black thinks Jake’s shine will finally bring down the Dark Tower. Jake meets up with Roland, who realizes he can use the boy as bait to confront the Man in Black. Not having read any of the books, I’m guessing Director/writer Nikolaj Arcel, along with co-writers Akiva Goldsman, Jeff Pinkner, and Anders Thomas Jensen were trying to create what they thought would be the most marketable story-line. I’m curious as to what other story-lines there were and why they choose this one. I ask because this doesn’t feel like it would have been the first book.
As a stand alone story it works but, without revealing too much, I’m wondering where they can go from here. Taylor and Elba are very likable in their roles; where McConaughey seems out of place. It felt like he was going to try to sell me a Lincoln at any time. His lines were delivered to laughs, but I still don’t get why the audience thought he was funny. I’m hoping there is a future for this franchise because fans of the books have been waiting a long time for it’s theatrical debut, and I don’t think anyone will be happy with this incarnation.
Swanner: 2 1/2 Stars

Swanner: A colony transport heading towards a distant planet answers a distress call that leads to a disastrous outcome. Taking place 10 years after Prometheus, Ridley Scott directs this latest entry to the Alien franchise that feels more like a slasher film than any of the previous films. Barely introducing us to any characters and then jumping straight into the action.  When I look back at the first two films, they were very much character driven. I cared for the people and it made the carnage personal.  As characters are killed off in the current film, I didn’t care since neither the director nor the writers thought there was any reason to build a relationship with the audience and the “victims” of this film.
You might think I’m being hard here but I have been a fan of the Alien films since the original debuted in 1979. I even remember seeing Aliens on my birthday and thinking it was a really cool gift. I’m not saying the film isn’t well made. You can see every dollar on the screen. It’s amazing to look at, but it’s like biting into a jelly donut and discovering the center is empty. In the first really big action sequence on the planet, multiple characters are killed and I couldn’t have cared less.
This makes me angry; not because I actually had to pay to see the first showing (because I’m weird like that), but because these films have meant something to me both as a film lover and a fan. I’m okay with the creators changing the mood of the film. Alien was a horror film where Aliens was an action film and they both worked because we cared. The film does have it’s scares and can be quite intense. The cast is good but obviously not memorable. I also didn’t like the ending because it leaves us without hope. Will there be another Alien film? If this film does well, there probably will be; but I won’t be first in line on opening day because Alien: Covenant taught me not to care.
Swanner: 2 Stars
Swanner & Judd Film Reviews
Blog at WordPress.com.