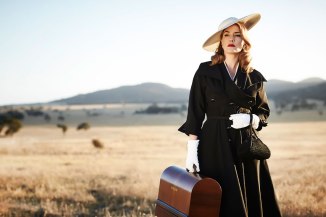 Swanner: When Tilly (Kate Winslet) returns to her rural Australia home, the town is unaware of who this beautiful woman might be. Once they learn this is the girl they sent away years ago, everyone fears why she might me back. As a young girl Tilly was accused of killing a boy and sent away. After years of traveling she returns with her sewing machine, couture fashion and an eye for revenge.

This looked like a comedy when I first saw the trailer. Even though there is a lot funny here, this is no comedy. When Tilly left, her mother (Judy Davis) basically lost her mind while Sergeant Farret (Hugo Weaving) controlled all that went on. The film felt a lot like To Wong Fu with it’s dramatic themes, fabulous outfits and a small town that gets larger as they need more faces on screen.

Director/writer Jocelyn Moorhouse, along with PJ Hogan, bring Rosalie Ham’s novel to life, but, not having read the novel, I can only judge what I see on the screen. The story really should have kept the fun of the beginning of the film, and pulled back at the darkness that overtakes it. By the end you’re wondering how things got so ugly as we find out the secrets and lies the town’s turned away from for over 20+ years.

Winslet and Davis are terrific and Liam Hemsworth serves nicely as Tilly’s love interest. It’s not just Tilly’s secrets that get revealed in the horrific third act, we find no one in town is an innocent. The film is dark and a bit long, coming in just under two hours. It’s not the kind of film for which you need to go to the theatre; all the disapproving head shaking would be distracting to everyone else.

Swanner: After the town of Rose Creek is taken over by a ruthless Industrialist Bartholomew Bogue (Peter Sarsgaard), a widow (Haley Bennett) searches for a few brave men who will take on the bad guys. Gathering together a bounty hunter, criminals, gamblers and hired gun, they prepare the town for the blood bath on it’s way.

Judd: A remake of a remake of a remake, everything has to be made bigger, louder and noisier for today’s attention deficient audiences. Directed by Antoine Fuqua, the movie starts out as your typical Western, but then turns into a Michael Bay spectacular – but still within the period – ending with a needlessly long 35 minute gunfight.

Swanner: If you’re going to trim something how about all that needless “where are we going to find 7 men crazy enough to help us” part. The gunfight is the fun part. I thought there were some really good performances especially from Denzel Washington, Sarsgaard and Vincent D’Onofrio. Technically, the film is well done with spectacular cinematography. Director Antoine Fuqua brought the same kind of tension he brought to Training Day and brought out another  terrific character for Washington.

Judd: Yes, let’s trim down the plot so we can enjoy more mindless action. That’s what the movie needed. And if you’re willing to cut out plot, why worry about performances? I will agree that Washington, Sarsgaard, D’Onofrio and Haley Bennet gave great performances, and I would have enjoyed more of them acting instead of having my time wasted in a hail of bullets. With a runtime of 2 hours and 13 minutes, there was plenty of excess to be excised. Though, I have to admit between Denzel Washington as the lead, the bean dinner scene, and the dynamite in the trenches — more than once I was expecting Gene Wilder’s Waco Kid to show up.

Swanner: I’m not a big fan of westerns anyway. Trying to understand why people voluntarily lived that way is above me. When I think of westerns, I think bullets flying, not excessive character development. so I really enjoyed the film. I was glad that they finally used the theme from the 1960 film by Elmer Bernstein at the end of the film. They teased it through out, so it made the ending even more satisfying.

Judd: I, also, am not a big fans of Westerns, but the Cohen’s True Grit proved that a Western remake can be a character driven piece. Fuqua’s Magnificent Seven is a Western themed action movie. Had I known that before seeing the movie, my expectations would have been a little different. That is still no excuse for a 35 minute gunfight.

Swanner: We all grew up with the story of storks delivering babies, but we never knew why they stopped delivering. Storks opens where the birds are still distributing, but now for online retailer Cornerstore.com. Junior (Andy Samberg) has just been promoted to Boss, but as part of his new position he needs to fire Tulip (Katie Crown), a human girl who was never delivered to her parents, and has lived with the storks for 18 years now.

Judd: Oh, if only the story were so simple. Tulip is sent to manage the mailroom in the abandoned baby factory. She accidentally creates a baby based on a letter sent by an only child whose parents are too busy for him. She vows to deliver this baby with the help of a broken-armed Junior. They are being followed by: some bird with a wig (never explained); the original stork that miscarried Tulip; and a pack of wolves that can transform into different things. Meanwhile, the parents of the only child rediscover the joys of parenting when they learn a new baby is on the way. This is a disaster of a script, and I was shocked to learn that Nicholas Stoller wrote it.

Swanner: They did explain Jasper (Danny Trejo), he couldn’t deliver Tulip because he loved her too much. The wolves I don’t remember because I fell asleep. I do agree the script is way too complicated for a movie appealing to kids. What am I saying, I feel asleep and you can’t remember the plot three days later. It’s a mess but it did have some good laughs. Just ask that man that sat behind me. He kept waking me up.

Judd: I can’t remember the plot because there wasn’t one, and Danny Trejo wasn’t the bird with the wig, Pops! There were a handful of funny gags, but that can be said about almost any terrible movie – anything starring Rob Schneider would be an exception. The script and direction felt very much Samberg’s brand of absurd and unfunny humor — see Hot Rod for a perfect example. This is Doug Sweetland’s first time directing a feature film, and it was obvious, though again, I would have thought co-director Stoller would have had tighter reins on this mess. Even the Lego short that came before the movie was terribly unfunny.

Swanner: The Lego short before was very funny. It set the bar too high so when Storks started if couldn’t hold up. What we’ve established is the script was too complicated and just plain terrible, the voiceovers added nothing to the film and the direction sucked. This coming out in September probably should have told us to expect awful. Sometimes I wish we weren’t such positive thinking people.

Judd: The Lego short that came before the movie was terrible, and I’m surprised that Lego would let the movie go out with their name on it, given their standards for quality. It should have been branded Kre-O. I wasn’t expecting good, but I wasn’t expecting heinous. Storks is an albatross.

Swanner: Blair Witch follows James and his friends as they go searching for his sister Heather, who had disappeared 16 years ago. Heather, of course, was the character from the first film that we last saw hitting the floor at the end. Now, 16 years later, James sees Heather’s face in a piece of online video, so he and his friends are going camping in hope of finding her.

This is very much a sequel. The reason I mention this is because the studio had originally called the film The Woods. When they announced it was really called Blair Witch, the horror community totally freaked out because the writer (Simon Barrett) and director (Adam Winged) are the same folks that wrote and directed the classic You’re Next. I hoped this new look at the Blair Witch was going to be a much fun as it would be terrifying. It was definitely fun and they had no problem with the terrifying portion.

If you remember the original film, the shaky camera was actually making audiences nauseous. They handle the shaking camera by making the flash lights the focus. They also created paranoia amongst the audience as we wait for something to pop out there in the darkness. I did like the way the script drags us back to the woods. Once in the woods, the scares start right away and basically don’t stop ’til the last frame.

The cast is made up basically of unknown actors, but they do a good job and can all scream on cue. There were some folks laughing at the scary parts in the film but we know its the way they hide the fact that they are close to crapping themselves. The second half of the film is terrifying. I know I was clenching my teeth so not to reveal my horror. Now I’m going to stand in the corner.

Swanner and Judd talk about So You Think You Can Dance; American Gothic; Difficult People; Drag Race; Big Brother; Finding Prince Charming; Welcome to Me; The Guest; The Wild Life; Sully.