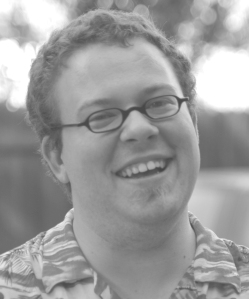 Brian Judd spent his formative years growing up in middle America, where his family lived in denial about everything. Years later he would find himself living in CA and auditioning for a part in a play for Lambda Players Theatre. He got the part and became involved in the theatre behind the scenes as a board member. It was this path that led him to meeting Tom Swanner. Judd resigned from the board years later, but remains active with the company as an actor and director.

In 2004 a new LGBT newspaper, Q-Ragg, approached Judd with the idea of partnering with Swnner to do film reviews. Judd had never done film reviews, but had an extensive knowledge of films, and a love for classic films.

Swanner and Judd have worked for 10 years, “because some publisher thought Tom hated everything and needed balance,” says Judd. Since the teaming, Judd feels he has done everything he can to give realistic reviews for the more jaded moviegoer, while Swanner, “proves every time that he is a 14-year-old girl who tries to find something good to say about even the worst crapfest.”

Judd lives in Sacramento, CA where a portrait of Anita Bryant hangs over his bed so he can point at her and laugh daily. He is alone and bitter and likes it that way.