Swanner and Judd talk about Southpaw; Pixels; The Past is a Grotesque Animal; Joe Dirt 2; Do I Sound Gay?
Left Click To Listen, Right Click Here To Download

Swanner: I’m not a big fan of sports movies going in to the theatre. I don’t like the blood or violence, but in the middle of summer, it’s nice to see a movie who’s main focus is the acting. Jake Gyllenhaal stars as Billy Hope, an up-from-the-streets fighter who as become a champion in the boxing ring. After a shooting accident which leaves his wife dead, (its not a spoiler if it’s in the preview) Billy Hope has to pull his life back together to save his daughter from the social services system.

Judd: I was interested enough in Southpaw to lift my hiatus and see the movie at a press screening. Between Gyllenhaal and Forest Whitaker, I figured Southpaw would be a character piece about boxing, rather than a boxing movie. Unfortunately, I was wrong. While Gyllenhaal and Whitaker act the shit out of this movie — how’s that for eloquence? — their talent is bookended by a cliched comeback story, and sympathy for Billy doesn’t come until the movie is half over.

Swanner: I agree that the movie did fall into the cliche comeback story, but the acting, for me, was what kept the film’s head above water. I wish the comeback had started earlier, because once it did, the film got better. The first half was angsty, as you would have expected, but I don’t think it needed to be. Billy has a daughter (Oona Laurence), that really needs him but his anger issues and self pity has this poor child living in the system. This alone should have had him getting his shit together faster. This time offered plenty of “acting” time for Gyllenhaal, when it should have been use to advance this story.

Judd: Outside of the cliched plot, the big thing that bothered me was that Hope’s recovery was glossed over. His temper and anger issues were broadcast to the back row, but how he overcame them was never addressed. The movie focused more on his physical training, not the mental training that Hope needed. At one point it seemed like screenwriter, Kurt Sutter, was going to give us an addiction/alcoholism subplot with Whitaker, but that too disappeared. The same went for his wife’s murderer and the little boy that was killed in an unrelated act of violence. Southpaw is a movie full of half told stories.

Swanner: No argument from me on what was missing. I thought the story they were telling was the father rescuing his child. That took too long to get to for me.  Director Antoine Fuqua obviously didn’t know what story he was telling. Fortunately, Gyllenhaal and Whitaker don’t give bad performances, because otherwise, the film is down for the count. 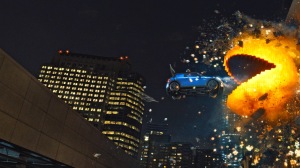 Swanner: If you see the preview for Pixels, you’ll see it’s a special effects, sci-fi comedy with Adam Sandler. Think how you felt at that moment… Pixels is not “that” bad. I mean, the film is bad because Adam Sandler is in it, but in this case the the story out shines Sandler. In 1982 NASA sent up a rocket that contained a video of pop culture from that era, which included many of the popular video games. The rocket is intercepted by aliens who have taken the afore mentioned video games as a threat from earth, and have come to destroy the planet. Sandler and crew are our only hope.

Now, the only thing Sandler’s ever saved was the careers of many a C-minus stand-up by making them movie stars. Something else he’ll pay for in hell. but I digress. As I mentioned, the story really works as an action comedy with the help of Josh Gadd, Peter Dinklage and Director Chris Columbus. They are talented, and they make everything they touch better. The film also stars Kevin James and Michelle Monaghan who I’m sure will remove this from their resumes before you can say “Razzie Nominee.” These two and Sandler do nothing here but make this bad script worse. The script was written by Tim Herlihy and Timothy Dowling and not the 8 year olds I assumed. Herlihy should finally win the Razzie that has somehow slipped through his fingers all these years as one of Sandler’s scribes.

I do feel bad for Gad and Dinklage, but if anything can save this film it’s them and the special effects team. The movie is watchable, so if you’re the parent that lost the bet you probably won’t be suicidal at the end. This is a kids movie. The script is just as bad as any Disney channel comedy meant for preteens, but for the older folks, just seeing Q-Bert, Centipede and Donkey Kong might be enough to make the pain of paying for this crap okay.

Swanner: I was never a big fan of the Despicable Me films. I didn’t like Gru or those kids but i did like the minions. They were funny and like the Penguins of Madagascar i wondered if they were characters that could make it on their own. Unlike the Penguins, the Minions do have enough story and fun to make it on their own with their own feature film. Enter The Minions.
It seems the minions have been around forever trying to find evil and to follow it. The problem is the minions tend to get in the way and most of the time have been been the reason for their masters undoing. The minions history brings us to the late 60’s where they start to work for Scarlett Overkill ( Sandra Bullock) how they ultimately do her in as well.
I was really happy to see this film work. The Minions are great little characters and have become pop culture icons. I’m hoping to see them do as well as the first two films have done but with maybe a bit more to prove their value. Directors Kyle Balda and Pierre Coffin (director of the first two films and voice for the three leads minions) and writer Brian Lynch have given Kevin, Stuart and Bob plenty of fun situations to get us through these hot days of summer with a cool afternoon at the local cineplex. Jon Hamm. Michael Keaton, Allison Jennings Jennifer Saunders and Pierre Coffin suppling the vocal talent. Even with all the talent involved what makes the minions work is the minions. They are charming and lovable but don’t let them come home with you…remember what happened to the dinosaurs.
Swanner: 3 Stars 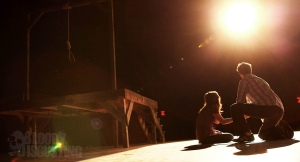 Swanner: This latest found footage horror attempt has four high school student breaking into their school to deface the set of the school play. The play is called The Gallows and when the play was last performed, 20 years ago, the lead actor was accidentally killed during a performance. Even with the rumors of a haunting, the four students venture in to the school at night to stop the production from happening.
Even from the previews it’s seemed this didn’t have enough story to carry it and it really doesn’t. The story behind the making of the film is what’s really interesting. The director/writers Travis Cluff and Chris Lofing put this film together with 150 thousand dollars in a Fresno high school and it’s become a major Warner studio release. That has been the payoff for the folks making these film, if made well the studios will come. The films are cheap to make and with a few extra dollars and a shitload of advertising…these films make money and a name for the makers.
Is the film as bad as i say? It depends on the audience member. I think most people over the age of 25 will find the film a perfect candidate for direct to video but for those younger than 25, they might just have some fun with it. The audience i saw the film with seemed to like it which means it should make some good opening weekend cash. Once the word of mouth gets out we’ll see what happens but by then this film would have made millions of dollars and at that point … who cares?

Swanner: When i remember Amy Winehouse, I always remember the concert where she was so messed up she couldn’t sing. That’s covered here in this documentary which covers her life and career, the ten years before her death. There are no roses covered lenses here. Using previously unavailable footage and public footage we see her raise to stardom and her dissent in to her drug and alcohol addiction. Winehouse like so many other young artists got involved with the wrong people who let her escape her pressured career with every substance under the sun and the people who should have told her no, didn’t.
Before she met Blake Fielder-Civil she was a typical teenager with dreams of fame but never expecting them even when doors kept opening for her. Once Blake arrived she put her trust in him and from there on her personal life was his. The director Asif Kapadia (Senna) fills this film with plenty of music as well as plenty of triumphs of her life. It’s only becomes tragic because we know how it ends.
You can’t walk away from this film without feeling the same way you felt when Michael Jackson died or Whitney Huston. These talented people just needed a real friend in the world. Amy was a truly talented soul who never believed she was good enough. Even after 5 grammies and millions of albums sold, Amy would never recover. This documentary is being given a wider release than most documentaries, so seek it out and support this kind of filmmaking.
Swanner: 4 Stars
Swanner & Judd Film Reviews
Create a free website or blog at WordPress.com.